Yazdi is one of the authentic Yazdi stews on the menu of all traditional Yazd restaurants. This stew is the same as usual, but there are differences in its ingredients. This stew uses split peas or so-called peas instead of chickpeas, and red meat, chopped onion, oyster lemon, cinnamon, cardamom and other turmeric are ingredients. In the traditional form it is not common to use tomato paste but nowadays some people add it to the paste. 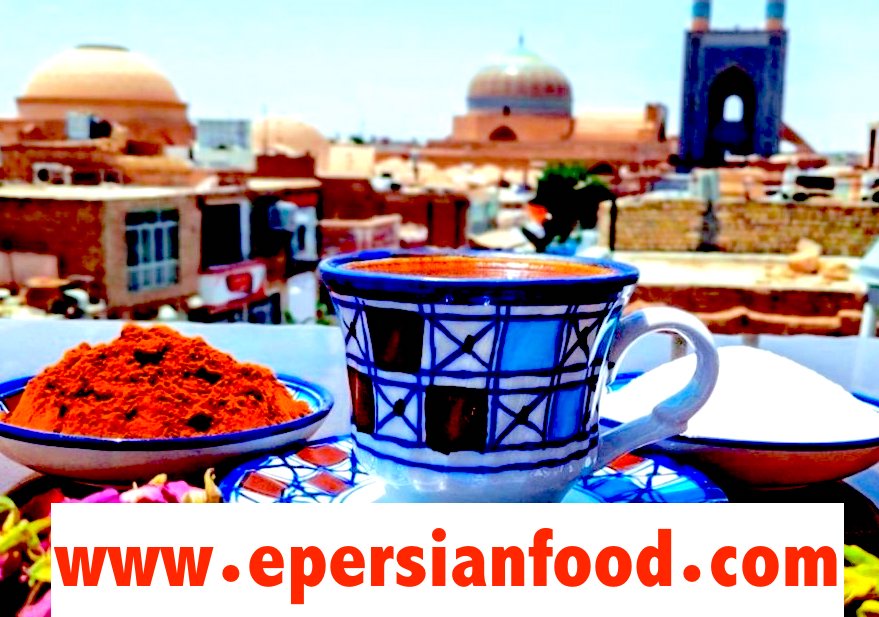 Maybe everyone will be reminded of Tabriz by the name of Meatballs, but in Yazd there are different types of Meatballs on the family table as well: Coconut Dumplings: A food similar to Tabrizi Dumplings, which uses aromatic herbs, raisins, barberry, fried onions, raw and cooked eggs, minced meat, salt and spices and tomato paste. Brass Dumplings: Using rice, minced beef, chickpea flour, chives, parsley, dill, fennel, mint, tarragon, cotyledon, egg, tomato paste, walnut and barberry. Chickpea dumplings: lamb, onions, eggs, chickpea flour and aromatic vegetables are the ingredients of this traditional dish. In the past, peas or raw peas were used instead of chickpea flour. The beans they had soaked the night before were thrown into the dumplings. This dish is also known as Yazdi Dumplings. Carrot Meatballs: Minced meat, onions, carrots, flour, tomato paste or pomegranate and aromatic vegetables are ingredients used in cooking carrot meatballs. It is also available in other cities in Iran.

This dish is known for its sweet and delectable taste and has many properties besides being easy to cook because of its plum and its combination. The plum stew is made with beef, meat, plum, cotyledon, onion, saffron, sugar and tomato paste.

Dish kebabs are one of the most popular dishes among Yazidi families made from a combination of potatoes, onions, oil, minced meat, tomato paste and cinnamon. This dish has a special place in Yazdi parties and sometimes carrots.

In Yazd there are two types of chewing gum:

Pumpkin Shack: Pumpkin shack or halva has a special place in the Yazidi family period. Cooked meals include pumpkin, red beans, mung beans, rice, onions, cinnamon and black pepper. Potato Peel: This dish is one of the almost forgotten foods of Yazdi which is cooked with a combination of potato, chickpea or red bean, mung bean, onion, half-grain rice, turmeric, cinnamon and black pepper.

Mutton, cotyledon, beetroot, oil, cabbage, tomato paste, Istanbul potatoes, and turmeric and pepper are the ingredients of this delicious broth that is found in Yazdi tables. Flea is the simplest food of Yazidis known in other cities under different names. This dish is made with colostrum or cow’s milk in early spring. The Yazidis boil colostrum and eat it after it has cooled when it turns into a porridge-like state. This dish has also existed in Haft-Sine tables in the distant past.

The use of yogurt in Yazidi cooking is not very common. They have replaced yogurt in foods such as yogurt with cucumber juice used in yogurt. Cucumber is a food curd for hot days in Yazd. Washing, rubbing and rubbing dry whey is one of the ingredients of this simple dish, then adding a few grated cucumbers, chopped walnuts, mint and raisins. Sometimes this dish is a snack on the table and can sometimes be the main dish.

Kale Gipa (or Gyro) is one of the foods that is cooked in Yazd in other central cities of Iran. Ingredients are rice, lentils, cotyledons, onions, apricot leaves, powdered cherries or barberry, which are poured into a cleaned water and cooked in a boiling water after sewing.

First of all we go to the most popular Ashzidi. Shawley is one of the soups that has a special place in the Yazidi table because of its easy cooking and deliciousness. The ingredients used to cook it depend on the season and various ingredients are used in summer and winter. Boiled mung beans, spinach, beets, dill and sometimes turnips and squash are ingredients of winter squash, and in summer they produce shells with some healthy or half-baked peas and lentils, chopped beets or half-squash and leaves. Pomegranate or grape vinegar as well as pomegranate paste are used as a seasoning for cooking and on the table. After the ingredients are cooked, pour the mixture of wheat flour dissolved in cold water and add to the hot onion as many as possible. Rice consumption in Ash Shulley is also sometimes seen.

Cooking this soup is common on the nights of March. In the city of Mehriz Bakht this ash is very common and it is cooked under the name of Ash Halim and in the name of Prophet Abbas. The name of this Ash is in Manshad, Jae Jae and in Bahadoran district, Esfandi Nights. Wheat Ash is also known as Ash Imam Hussein and is cooked in two ways: in the first method they use chickpea, chickpea, peeled wheat, greens and spices, and in the other, barley and wheat peel. Sturgeon, chickpea, lentil, mung bean, red bean and chickpea, and hawthorn, herb, mint and spice (cumin, turmeric, thyme) are the ingredients of ash. In both methods, hot garlic, hot onions, hot mint, and whey and sometimes olive oil give the taste a different flavor. There is no meat in the original recipe for making soup, but nowadays they add red beard when cooking soup. During the Muharram mournings, the boilers are set up to cook this soup. Baking this delicious cook has a special ceremony. A few days ago the stoves were seen on the streets and everyone was in the process of baking. Still in most parts of Yazd this ash is cooked with firewood and gives the city a strange atmosphere.

Unless we are in one of the provinces full of pomegranates and there is no news of Ash pomegranates. In Yazd province, Mehrizi cook the most of this soup and make it with lentils, rice, pomegranate juice and some pomegranate meat. They are cooked for the sick person during the illness and believe that the therapeutic effect of Ash is effective in improving the disease.

Ash pumpkin is cooked in the city of Taft and more in the winter. Yazidis find this dish to be a good fit for diabetics. They use beans, mung beans, chickpeas, squash, lentils, onions, oil, peppers, spices and dill and flour.

If you visit the city of Mehriz in Yazd, do not forget to taste the ash. Ingredients for this tasty soup are greens and mung beans and sometimes chopped potatoes. Go to Manshad area where you will find this dish at breakfast. It is customary for one of the relatives of a newly deceased person to cook the mash and bring it to the mourning family home. They believe the scent will take the deceased away from home.

This is one of the special Afta Taft city and because of the warm temperament in the winters of particular popularity among people. Cabbage, meat or fat, mung beans, vegetables, rice and spices make up the ingredients in this dish.

If you have a cold in Yazd, this is the first home-made cure for Ash Perk, which uses spinach, flour, barley, peas and chickpeas. Mehriz is one of the cities where baking this dish is very common.

Ardakan city is famous for its special cuisine which also has a special preparation. They cook raw unpasteurized dough, cook peas and mung beans, and add fried meat. To prepare this dish, a few drops of boiling water are boiled with a little oil. Cover the bottom of the pot with some dough and pour the mixture of beans and beans. Put a layer of dough again on it and then a layer of meat and beans and continue until the pot is filled. Now make a hole in the middle of the layers and fill it with sheep’s oil. This dish is cooked by the brewing method and some fire must be put on the pot. After brewing and for a relatively long time, Ash Jogawa is ready to eat.

In the early morning hours of March this ash is found in the streets of Ardakan. Barley, meat, beets, chickpeas, lentils and pomegranate paste are the ingredients that make up this soup.

The combination of chili or red beans, lentils, rice, soup greens, minced meat and tomato paste becomes a delicious soup called soup. They use this delectable ash to starve, scratch, and lower blood sugar and cholesterol. Ashgarh in East Azarbaijan province is also one of the most popular.

The plum is cooked with a mix of rice, minced meat, greens, cotyledon and fresh or dried plum. The taste of this soup is slightly sour and has its own fans.

Excited Dried bread that should be traditional Yazd bread with grated onion and cheese and walnuts and mix with the cumin, then add some water to make it like dough and into pellets To be ready for consumption.

Barbecue bread is a tasty oatmeal that is mostly prepared on Thursdays and for charity. The bread is made using sangak flour, water, sugar, salt, coriander seeds, herbs, pulp and sesame oil. Mangout is the name of a delicious dessert made from starch, water, syrup and rose water, and sometimes saffron, and boasts pistachios and almonds. You can also go to ice cream shops and phalanges to try this dessert.

Paladeh or Faladeh is one of the delicious foods you can find throughout Yazd. Starch, rose water, sugar and sugar are the main ingredients. The difference between this type of faladide and its type of shirazi is rice-like and the use of black seed when serving it.

During the winter walnut berry sweets are popular among Yazidis. They crush the dried berries and walnuts to form a board and serve as a delectable snack.

One of Yazidi’s most interesting drinks is their own coffee, also known as mourning coffee. To make this coffee, pour the Turkish coffee powder with water, cardamom, rose water and yogurt in a copper pan and heat it for at least 6 hours. The concentrated coffee produced has a distinct and unique aroma. This coffee has a special place in mourning and some people think it is older than yogurt in tea. It’s not bad to know that Yazdi’s coffee has been nationally registered as one of the intangibles.

The name of Yazd, which comes to mind, is remembered with lentils, lentils, watermelon and delicious sweets that are souvenirs of Yazd and their taste will never be removed from the Iranian taste. In general, sweets are very popular in Yazd and their consumption is high among Yazdis. Yazidis consume a lot of tea, and sugar and yogurt are always at their side. The mornings are found in Yazdi tablecloths, traditional bread and latte and dry bread, and in the colder months of the year syrup and halva can be found in any home. On Thursdays, the smell of barbecue bread rolls down the streets, and everyone is waiting for this goodie. Yogurt is not very common in cooking yoghurts and they have replaced yogurt with foods such as yogurt in which the yogurt is used; There are some differences in the recipes. For example, seeing ring-shaped and fried beets in yogurt eggplant curd does not seem strange at all. Watermelon and pomegranate are the most consumed fruits and pomegranate paste is cooked in some parts during special occasions. The pomegranate paste of Yazd is thin and they are sliced ​​to taste. Pomegranate paste is sometimes used as a seasoning and sauce on the table. Another thing about Yazidis is their focus on traditional medicine. They pay close attention to the cold and hot nature of their foods when preparing their foods, and are more likely to consume hot foods. So every house has a shelf of herbal remedies and part of the house is dedicated to the maintenance of herbs.

This entry was posted in Cooking Tips and tagged Persian Foods. Bookmark the permalink.